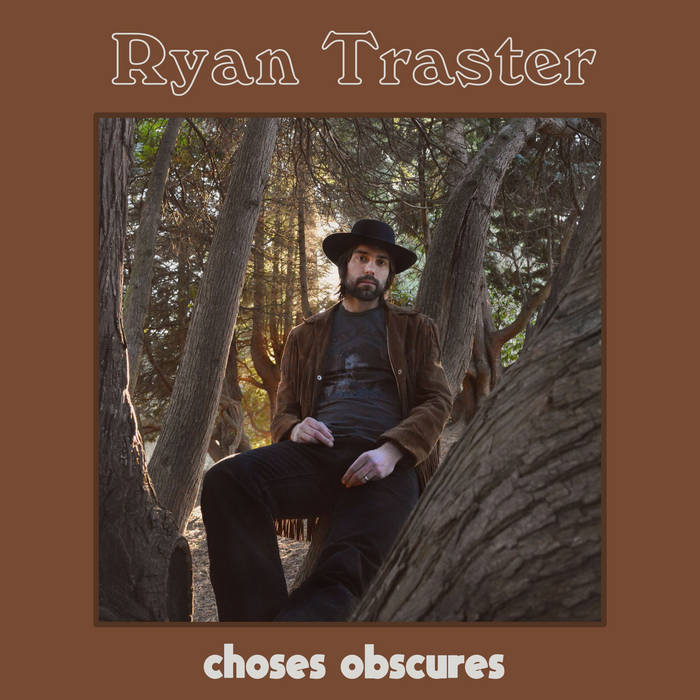 The upcoming new album by Minneapolis-based singer-songwriter Ryan Traster (July 19th, Slow Start Records) features that warm, worn-in vibe of an album that’s been in your cool parents record collection since you were a kid. Eventually, it gets passed down to you to take along into “the real world” and is there when you need to be reminded of being a kid again.

It’s that gem of a find in a milk crate of vinyl at the local tag sale on a Sunday afternoon. The kind of album that becomes an all-time favorite, only discovered there by the person who knows what they’re looking for and has the time to dig for it.

Choses Obscures (the title translates from French as “obscure things,” and implies a “dark energy”) is both of those things, and that implied darkness provides a subtle mask that contrasts and deepens the sunny images above.

When Traster throws curve balls with lyrics of places and times that don’t abide the most famed of singer-songwriter eras (the kind that even the album’s cover art evokes), things get real.

It comes as a jaw-dropping surprise to hear Jesus and Mary Chain name-dropped on “Endless Summer Blues” when Traster sings, “We were living in Echo Park / I was smoking dope in the backyard / You were listening to all those Mary Chain records / We had the endless summer blues.”

According to Traster, the album’s cosmic-country, straight outta Laurel Canyon feel is heavily influenced by Skip Spence, Bert Jansch, and Judee Sill, all of whom passed before their time. That “beyond the grave” murkiness pervades Traster’s lyrics in a profound way, even down to that JAMC reference.

Choses Obscures is “born from the subconscious in troubled times, both personally and globally,” Traster explains.

“I wrote a good chunk of this record while traveling the east coast, following a few years of international touring,” he says. “I ended up in Nashville, going to dive bars alone, and hanging out in a dingy bedroom.”

After that long world-wide stretch on stage, Traster was actually unable to perform when he got to Nashville, as he had sustained a vocal cord injury on the road.

“My focus was solely on crafting the best material I could with the plan to record it when I regained full health,” he says.

It was a dark period for Traster, but he managed to find inspiration while working at Nashville’s world famous Ryman Auditorium, where “listening to old timer’s tales, and being submerged in song, helped me create what I believe is my best material to date.”

The album’s first single “New Again” backs up that claim, a sonic re-birth as its title suggests.

The song lands in that friendly Traveling Wilburys, Tom Petty, Jeff Lynne zone that makes it an instant earworm. It’s just that kind of song that you hear as a kid, sticks with you, and is there when you need to be reminded of being a kid again. Choses Obscures, the second full-length album by Ryan Traster, arrives July 19th from Slow Start Records.

Mixed and Mastered by Ed Ackerson at Flowers Studio in Minneapolis.

Bandcamp Daily  your guide to the world of Bandcamp